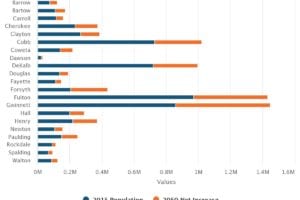 The Atlanta Regional Commission (ARC) released their 2050 population forecast this month.  ARC is a regional planning commission that provides data and analysis for the 10 counties that make up Metro Atlanta.

Over the next 30 years, the metro area could see a population increase of 2.9 million that is both older and more diverse than today.

The AJC sought out USI faculty and affiliates for their story on the forecast and its implications.

Joseph Hacker said that the rate of gentrification has sped up, with what used to take decades occurring in two years. This compounds affordability challenges. “Supply and demand of housing has created this enormous leap in the cost of housing. We can’t build it fast enough,” he said.  “As they move forward, communities need to think about who they’re building for not who they hope they’re building for.”

Jean-Paul Addie also mentioned affordable housing: “What is affordable and who defines what affordable is? That’s another political question as much as it’s a real estate or planning question … that locks in an uneven geography of development.”

Addie also mentioned issues of planning and mobility, “It’s no good having two or three pedestrian blocks surrounded by eight lanes of highway or disappear into sprawling single-family home subdivisions,” he said.

Atlanta is known for its sprawl and its automobile dependency.

Chris Wyczalkowski said cars are “your little box with air conditioning and someone talking to you on the radio.”

The love of cars make transit a harder sell. “It’s this chicken, egg thing.  You don’t want to use the public infrastructure becasue it isn’t good enough, we don’t build more because people don’t use it. But we need this slow change,” he said.

Access all of the data from the 2050 population forecast here.