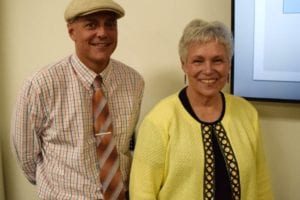 Urban Studies Institute Professor Risa Palm and USI AffiliateToby Bolsen have been researching public attitudes about Climate Change. The results of this work in South Florida are presented in their new book, “Climate Change and Sea Level Rise in South Florida: the View of Coastal Residents,” (Springer 2020).

“The need for the people of Florida to accept the reality of climate change and work towards policy solutions is particularly urgent,” she believes.

“Florida’s coastal areas have been shaped by incredibly complex settlement patterns. Many of these communities have been developed with no attention to environmental hazards but a great deal of attention to real estate profit. The results along the coast are particularly disastrous in respect to climate change.”

Drs. Palm and Bolsen hypothesized that showing residents a map of flooding to their city would result in changing attitudes, but Palm said they were proven wrong: “It didn’t happen. There was actually a decline in those who believe it is happening and will have an impact on their home values.”

Political ideology and party information were the strongest predictors of attitudes, which Dr. Palm sees as a dangerous barrier to accepting reality and working towards positive solutions: “We must find a way to counteract both the suspicion that the information coming out about climate change is politically motivated and the resistance to new information. It is urgent that we come up with more effective strategies to convince skeptics,” she said. “The nation and the world are at risk.”

Residents who prioritize economic growth over environmental protection were also more skeptical about climate change and its impacts. Female residents expressed concern about climate change more often than male residents. Those residents living in areas prone to flooding were generally more receptive to mitigation efforts if they are in the form of building regulations and physical barriers.  Measures that would increase personal costs, such as higher fuel taxes, were much less popular.

See the story here and here.