India has plenty to offer in terms of urban puzzles. For example, in recent decades its urban growth rate has been very slow while the economy has expanded fast; internal labor migration (mostly rural-urban) estimates range almost absurdly from 25 to 200 million workers; the caste system persists among large parts of the population even in modern and globalizing cities such as Mumbai or Bangalore.

And now there’s COVID-19. There is an awful lot about this virus that is still unknown and the data, everywhere, are in a state of flux and will be for some time. But here’s why India makes for an intriguing case.

On April 29, India reported a total number of 31,787 COVID-19 cases and 1,008 deaths. For a country of 1.3 billion people, and where the virus was first detected months ago, these numbers are very low. The death rate (just over 3%) is low as well in comparison with many other countries (in the US, it is estimated over 5%).

These low numbers are also perplexing in view of the extra-ordinary densities in most Indian cities. Mumbai has about 50 (!) times the density of Atlanta (figure 1). Clearly, density is an important factor in the patterns of diffusion of COVID-19 and other infectious diseases. Consider just this: every day, on normal days, around 5-7 million people board Mumbai’s overcrowded intra-urban trains. Anybody who’s ever moved around this or other Indian cities can attest to the impossibility of staying 6 feet apart from other people. Even 1 foot is a challenge! 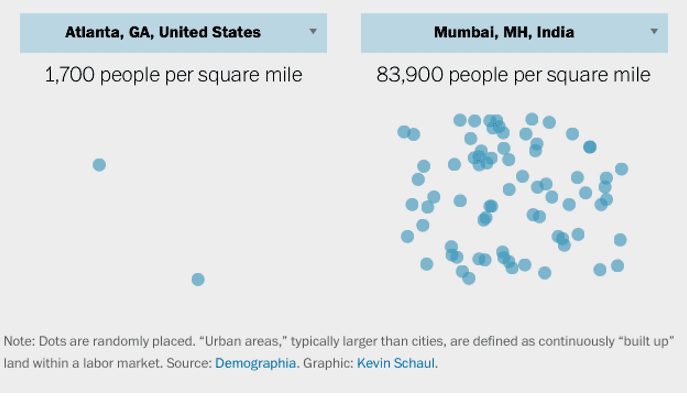 Inside the slum areas, densities are much higher still. And at least around 6 million people in Mumbai live in slum conditions. One famous example is Dharavi, one of Mumbai’s oldest and largest slum areas (though, here and elsewhere, usage of the term slum is contested and controversial). In Dharavi, an estimated 500,000 people (or more) live inside a 0.7 square mile area (figure 2). That’s equivalent to about 1,200 people on a football field. Residential spaces are cramped, and, within communities, the boundaries between private and public space are fluid. Moreover, sanitation is notoriously lacking. Toilets are absent in most private dwelling and the majority of people depend on public toilets. Estimates range from 50 to 400 persons per toilet, varying from one area to the next within Dharavi. The horrendous state of sanitation in most slum areas has been a scourge for a very long time and one can only hope that something good might come out of this crisis in terms of badly needed, structural, government-funded improvements. 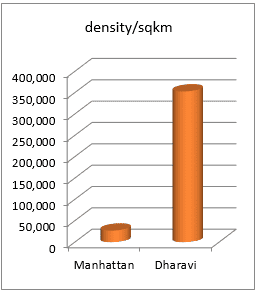 Nonetheless, by April 28, there had been ‘only’ 330 reported cases and 18 deaths in Dharavi. The city government and various NGOs were working hard to put protective measures in place, to educate residents, and to treat patients. Still, given the extreme densities and poor sanitary conditions, these numbers seemed very low.

What could explain the low numbers of infection and deaths, across India but also for Dharavi? First, maybe the reported COVID-19 statistics are just way off due to underreporting (the numbers on testing in India are murky and testing is said to be lagging). This is a real possibility, but we should not underestimate India’s formidable bureaucracy, which has a passion for records and statistics, a tradition kept up over the years by the government at various levels.

Second, the lockdown enforced by the Indian authorities since March 25, harsh as it has been on many poor people, may have proven successful in containing the spread. It will have been quite impossible to implement the lockdown within slum communities but it may have reduced diffusion from slum areas to other parts of the cities.

Third, and this might be a critical factor, India has a very young population, one of the youngest in the world. In slum areas like Dharavi, the population is even younger, with many people being first or second-generation migrants. In that respect, it stands in sharp contrast to, for example, Italy (figure 3). The share of the population over 80 years of age in Italy is five times that in India. The WHO reported in early April that 95% of fatalities in Italy were people over the age of 65, and half of all fatalities were people over 80. The demography factor is now hotly debated in India and some are suggesting that India’s way forward in the pandemic is to aim for so-called herd-immunity: allowing a majority of the young to be exposed and gain resistance to the virus while protecting the relatively small number of elderly. It is not clear at this moment what direction the government will take.

Figure 3. Population pyramids for Italy and India, 2018. Source: US Census

COVID-19 is a moving target, in India as elsewhere, and what we think we know today may be simply wrong or could be rendered invalid tomorrow. Perhaps the number of cases and deaths in India, and in India’s cities and urban slums, will escalate in the weeks ahead. For now, the statistics coming out of India are a huge relief and we can only hope they remain at these low levels. However things turn out when this is all over, urban India will provide a compelling research focus with plenty of public health implications.

For a visual impression of Dharavi: https://www.reuters.com/article/us-health-coronavirus-india-slum-widerim/life-under-lockdown-in-indias-massive-dharavi-slum-idUSKBN2210WV